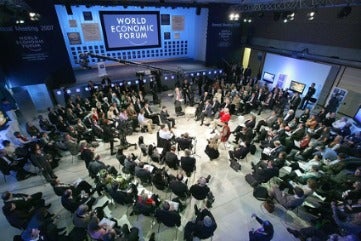 The World Economic Forum (WEF) is an independent international organization committed to improving the state of the world. As stated in its mission, it, “engages business, political, academic and other leaders of society to shape global, regional and industry agendas.”

The Forum was first conceived in 1971 when a group of European business leaders met in the ski town of Davos, Switzerland to consider the major global issues of the day and to brainstorm on solutions to address these challenges. Since that time, the WEF has grown to occupy a global platform. It actively includes leaders in government, business and civil society in its efforts, with the idea of joining these different spheres of influence together “in the collaborative and collegial Spirit of Davos.”

As summarized by WEF Founder and Executive Chairman, Professor Klaus Schwab, “At the World Economic Forum we have to create platforms for the three main pillars of society… to interact and confront the issues which we have on the global agenda.”

Learn more about the WEF at www.weforum.org.

As a University community deeply committed to addressing issues and initiating dialogues with global impact, Georgetown actively engages the World Economic Forum. In particular, Georgetown contributes to several key platforms within the WEF in a leadership capacity. 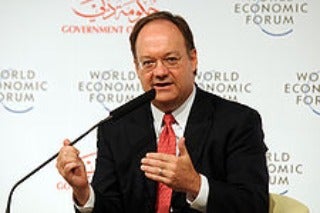 Dr. DeGioia presents on a panel at the World Economic Forum

Georgetown is one of 25 universities to participate in the Global University Leadership Forum (GULF). GULF was established in 2006 to develop a global community of university leaders, foster collaboration between top universities in areas of significance for global policy, and help shape the agenda of the World Economic Forum. The 25 university leaders who compose the group hail from 9 different countries and represent a stable source of scholarship, thought leadership and strategic advice on pressing global issues. Learn more here.

In conjunction with GULF, Georgetown in January 2010 signed the GULF Sustainable Campus Charter, a partnership of GULF’s network of 25 universities and the International Campus Sustainability Network. By signing the charter, Georgetown pledged to:

Georgetown University also plays an important role for the WEF Global Agenda Council on Values. In 2008, the World Economic Forum established a multi-stakeholder network of Councils to address the foremost topics in the global arena. Each of these Councils convenes relevant thought leaders from academia, government, business and other fields to capture the best knowledge on each key issue and integrate it into global collaboration and decision-making processes. Read more on the agenda councils here.

Since 2008, Georgetown has been centrally involved with the Global Agenda Council on Values through the leadership of President DeGioia and Dr. Thomas Banchoff of the Berkley Center for Religion Peace and World Affairs. The Council works to understand how the articulation of explicit, shared values may support more effectiveness in tackling interlinked global problems, with the transparency and stability of economic systems as a primary focus. To do so, it seeks to engender a discourse about shared values and systemic solutions based on agreed moral principles.

As the Council on Values website states, “The current economic crisis – a crisis of values – presents an opportunity to realign our collective moral compass, in part by tapping into faith traditions, which serve as sources of identity and ethical orientation for individuals, families, communities and societies. To do so the Council on Values is proposing a new mindset for a more moral economy.” Read more about the Global Agenda Council on Values here.

Faith and the Global Agenda: Values for the Post-Crisis Economy

As part of our engagement with the Global Agenda Council on Values, Georgetown University’s Berkley Center for Religion, Peace and World Affairs collaborated with the World Economic Forum in January 2010 to launch a second report, “Faith and the Global Agenda: Values for the Post-Crisis Economy.” 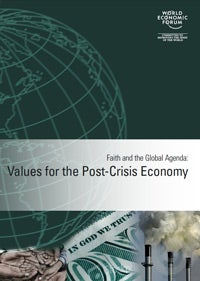 The report includes a Facebook poll of 130,000 respondents in ten countries, two-thirds of whom considered the current economic and financial crisis to be one of ethics and values as well. The report also contains essays by global religious leaders including Archbishop of Canterbury Rowan Williams and Patriarch Bartholomew, and an essay by Berkley Center Director, Thomas Banchoff, reviewing major developments at the intersection of religion and world affairs in 2009.

To learn more about the report and to read it in full, visit the Berkley Center website here.

The Global Redesign Initiative and Global Agenda Council on Faith

The Global Redesign Initiative was developed by the World Economic Forum to help enhance cooperation across sectors, industries and disciplines. Its goal, as stated by WEF, is to “Integrate the Forum’s diverse communities through a series of meetings and activities structured to promote integrated thinking and develop proposals to improve structures of international cooperation in a wide range of areas.”

Georgetown has been particularly engaged in the Global Redesign Initiative through the Global Agenda Council on Faith, which President DeGioia chaired in 2010. The central product of this engagement has been an analysis of the current “Moral Economy Dialogue,” which was included as a chapter in the final report of the Global Redesign Initiative, released in May 2010 at a special meeting of the WEF held in Doha, Qatar. As a whole, the final report constructs the parameters of an optimal system of global cooperation and lays out a set of pragmatic, actionable steps in specific areas of international cooperation. 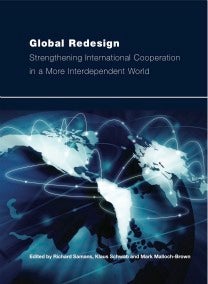 The “Moral Economy Dialogue” chapter of the report, authored by the Global Agenda Council on Faith, details the importance of developing a new “moral economy” in response to the systemic, interlinked problems the world faces today, especially brought to light as a result of the global economic crisis.

As the report states, “It is time for a new, moral economy. The current economic crisis – a crisis of values – presents an opportunity to realign our collective moral compass, in part by tapping into faith traditions, which serve as sources of identity and ethical orientation for individuals, families, communities and societies.”

The report proposes a strategic approach to creating this new moral economy, a framework that the WEF has adopted and today uses to structure the work of the Global Agenda Council on Values.

Islam and the West: Annual Report on the State of Dialogue

In January 2008, Georgetown University and the World Economic Forum worked together to launch “Islam and the West: Annual Report on the State of Dialogue.” The report provided a systemic and thorough overview of how Muslim and Western societies perceive and relate to each other at the political, social, economic and cultural levels. 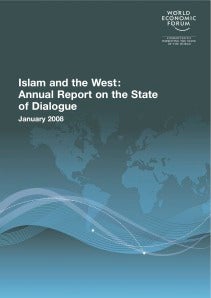 President DeGioia, in collaboration with Dr. Thomas Banchoff of the Georgetown University Berkley Center for Religion, Peace and World Affairs, acted as lead authors of the piece, which was the result of in-depth research carried out by academics and experts in the field. The report finds that majorities in populations around the world believe that violent conflict between the West and the Muslim world can be avoided, yet they also share a great deal of pessimism about the state of the relationship.

The goal of the report was to frame a dialogue on the central issues surrounding the relationship between the Muslim world and the West. As President DeGioia writes in the preface, “Dialogue is no substitute for political leadership and practical problem solving. But the dialogue efforts outlined in this report – efforts oriented to action around social, political and economic agendas – have a vital, still underappreciated importance. Dialogue can increase knowledge and trust, point to both commonalities and differences, and frame joint efforts to address the pressing global challenges of the new millennium.”